The AppleJack (P-ADB) connector is a ruggedized version of the Apple Desktop Bus (ADB) port used on Pippin consoles.[1] Adapter dongles could be used to connect ADB devices designed for Macintosh with Pippin systems, and vice versa.[2]

The P-ADB connector contains 10 contacts within a grounded shield; four of the contacts pass through signals (or power) from the existing ADB specification. However, there are 6 additional "reserved" contacts which are not known to have been put into use before the Pippin platform was cancelled.[3]

The Game Gear handheld console from Sega uses a link cable that is physically compatible with the P-ADB connector.[4] However, because the Pippin's Cuda chip supplies 5 volts to one of the pins (per ADB specification), the link cable cannot be used as is and must be rewired to avoid the risk of electrical damage.[3][5]

AppleJack Controllers were produced in wired and infrared (IR) wireless versions;[6] the latter was released on November 22, 1996.[7] Rare ADB versions of the wired controllers were produced for Macintosh computers.[8] The controller contains a trackball which is the same size as ones used in Apple's PowerBook Duo line.[9] Controller input is supported by the InputSprocket component of Apple's Game Sprockets API or an earlier AppleJack input device driver.[10][11] The trackball's input is treated like a mouse, while a 'pipp' resource in the AppleJack input device driver maps each of the controller buttons to a keyboard or mouse button.[12]

Some controllers are known to have been hacked by users to add standard Macintosh ADB support.[14]

The controller was designed alongside the Pippin Power Player prototype between September 1994 and February 1995 by Ray Riley of Apple Computer with Dave Laituri and Gilbert Wong of Lunar Design.[15][16] 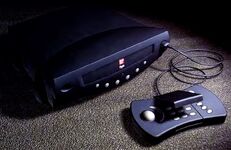 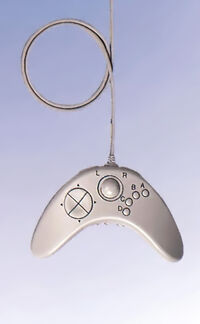 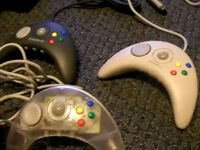 A clear prototype controller with standard black and white versions. 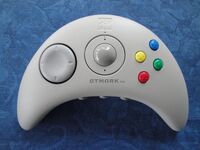 Top of a prototype controller with ADB port. 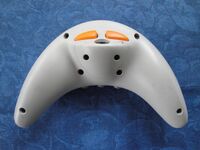 Bottom of a prototype controller with visible ADB port. 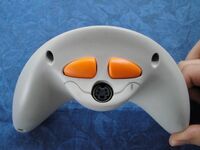 Front of a prototype controller with visible ADB port.

A keyboard and tablet for Pippin Atmark consoles, with visible AppleJack connector.

A rare ADB version of an Atmark-branded AppleJack controller.

A visually identical AppleJack controller that came with the rare black Atmark in Japan.

A very rare ADB version of a black AppleJack controller.

A unique AppleJack controller that came with the gold @WORLD console. 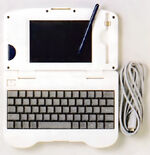 A prototype keyboard with an AppleJack connector.

This stub article needs more data!
You can help by expanding it.
Community content is available under CC-BY-SA unless otherwise noted.