The Apple Interactive Television Box or ITV,[1] also internally identified as STB (set-top box), is a television set-top console that had been in development by Apple Computer before the launch of the Pippin platform.[2] Some third party sources have also called this the "Pippen",[3][4] though no Apple documentation refers to it as such.[1]

The ITV was based on an Apple Quadra 605 running a customized version of Macintosh System 7.1.1 with support for MPEG-1 playback through QuickTime software and a C-Cube CL450-P160 decoder.[1][5] It included processors from Brooktree, Motorola, Philips, Texas Instruments, VLSI Technology and Xilinx.[6][7]

After internal testing at Apple in 1993,[6][8] British Telecom conducted a technology trial of model STB1 in March 1994 with 60 employees in the Suffolk town of Kesgrave.[9] Testing in Europe was carried out in partnership with Belgacom, British Telecom (BT), and Telia Company.[15][16] Market trials with model STB3 began in Farsta, Sweden in May 1995 and expanded to 2,500 households near London in the following autumn.[17]

The UK version of model STB3 was branded by BT as the Voyager 2000 Interactive TV System and was deployed in Colchester and Ipswich.[18][19] The year-long trial included 8 schools and 4 public access points. Services included on-demand television, educational content, games, online shopping and banking.[20] The user interface and video animation were designed by Dot New Media.[21]

Apple and Bell Atlantic conducted trials in six states in the United States.[10][22] Network functionality was provided by Oracle Media Net, which would download a "stack", a multimedia runtime application that was authored with Oracle Media Objects.[9] Interactive educational programming was provided by The Lightspan Partnership.[17] For units tested in the Washington, D.C. area, MPEG-1 content was streamed at 1.5 Mbps over an asymmetric digital subscriber line, a technology that was being developed by Bell Atlantic subsidiary Bellcore.[23][24] Bell Atlantic ran their service trial on four nCube servers, which could each store up to 10,000 feature-length films.[25]

Apple unveiled the set-top box at the multimedia pavilion of the NAB Show at Las Vegas in April 1995.[14] At the NCTA Cable Show in May 1995, Apple outlined its milestones for market trials of its interactive television technology.[17]

“We believe ITV has the potential to be the low-cost portal to the information superhighway.”[17]
— Rick Shriner
Vice President, Apple Core Technologies

Though support for MPEG-2 and Super Nintendo games were being considered,[9][27][28] further development was cancelled after the ITV was deemed not to be commercially viable.[6]

The rare British Telecom GameCart has a Mini-DIN-8 serial port that would allow content to be downloaded from a Voyager 2000 Interactive TV System (BT's version of the ITV) to a Super NES console. Games available for digital download during British Telecom's Ipswich test included Super Mario All Stars and F-Zero.[29]

Front of a BT GameCart for the Super NES. 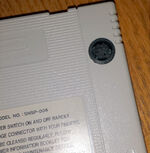 Back of a BT GameCart with Mini-DIN-8 serial port.

Circuit board from a BT GameCart.

With interactive services no longer available, default installations of ITVs are no longer fully functional.[30] Set-top boxes containing a red flash ROM SIMM are capable of booting Mac OS 7.6 to 8.1, but then video is not displayed due to lack of compatible video drivers. File sharing can be enabled and the set-top box will identify itself as a Macintosh 470 Series, Machine ID: 89.[31]

Front of an early prototype (STB1) in a generic case.

Inside an early prototype (STB1) without a power supply.

Inside an early prototype (STB1) with a power supply and floppy drive.

Front of an ITV box from consumer testing (STB3).

Back of an ITV box from consumer testing (STB3). 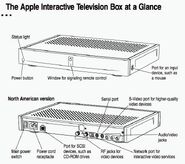 Diagrams of an ITV box (STB3).

Voyager 2000 Interactive TV System with a remote featuring button colors are similar to those on a Pippin AppleJack controller.

Mask ROM from a STB3 test unit, produced during the final week of 1994.

Back of a flash ROM from a STB3. 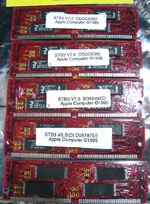 Retrieved from "https://pippin.fandom.com/wiki/Apple_Interactive_Television_Box?oldid=10225"
Community content is available under CC-BY-SA unless otherwise noted.