The title was announced in Bandai's Pippin Title CD-ROM Catalog for April 1996,[1] and was released in limited numbers in Japan by Bandai Music Entertainment as a hybrid disc for Macintosh and Pippin.[4][5] 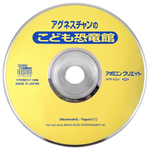