Fair, then Partly Piggy (はれときどきぶた) is a children's edutainment CD-ROM for the Pippin Atmark console, based on the picture book of the same name by Shiro Yadama (矢玉 四郎).[1]

Fair, then Partly Piggy was adapted for Pippin by Studio Flagship (スタジオ旗艦) and released in Japan in April 1996. It was translated into English by Keith Holman.[1][2]

It also supports Power Macintosh computers running System 7.5 or later with thousands of colors.[3] KanjiTalk or WorldScript support is required for proper display of Japanese characters on a Mac.[4] 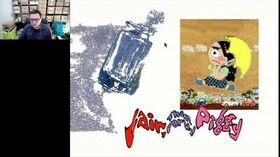 This stub article needs more data!
You can help by expanding it.
Retrieved from "https://pippin.fandom.com/wiki/Fair,_then_Partly_Piggy?oldid=10255"
Community content is available under CC-BY-SA unless otherwise noted.