Meet the hippest hound around!

US$ 24.95
Gus Goes to Cyberopolis is a CD-ROM children's edutainment title for Pippin consoles in which young users can explore numerous environments, seeking out the Cyberbuds. Parents can set the difficulty for children ages 3 to 8.[1] 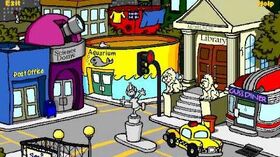