After starting to boot with a Pippin platform logo, a custom Mac startupscreen is displayed with images from remote western locations such as Dodge City, Kansas and Gallup Municipal Airport, New Mexico.[2] The CD-ROM then boots into the Finder, demonstrating that the developer had access to authentication tools to "Pippinize" the disc.[1] The startup volume is named "Pippin Netscape" and contains various Macintosh applications that can be launched, if enough memory is available.[2]

Files found on the CD-ROM, such as preferences, "Apple R&P Lib Reseller 1.0 DDB/DDF" and "BDE Self Running D5 16bit" indicate that this may have been an internal disc from a developer for Apple Computer or Bandai Digital Entertainment.[3] Other disc contents indicate that it may have been authored by Tony Diaz of Alltech Electronics, but it is undetermined how it had leaked out.[4] Diaz responded to outside inquiries with a cryptic image of Pippin developer and demo discs in front of a photo-retouched "Tuscon" road sign in Arizona.[5]

About window that is displayed from the Finder, running from the Macintosh on Pippin CD-ROM.

A floppy disk (emulated) being accessed through the Finder desktop of Macintosh on Pippin.

Tony Diaz' response to inquiries of whether he was involved with the "Tuscon" CD-ROM. 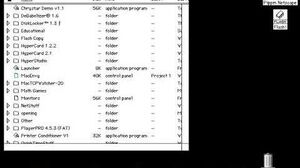 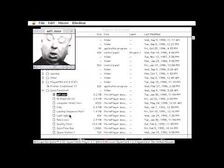