JP¥ 12,800 (later JP¥ 3800)
PEASE Pippin Compatible Kit (or PEase, short for Pippin Ease) is a CD-ROM-based shell which allows Pippin consoles to launch applications from a simplified alternative to the Macintosh Finder desktop. It resembles Apple Computer's own At Ease launcher.[1]

PEASE was developed by Maki Enterprise, which referred to the project as "Tiny OS".[2] A demo version was included on Pippin SDK CD DR1, which was released in Japan in May 1996.[3] The demo was authored with Party by Maki Enterprise.[4][5]

PEASE is bundled with utility applications, such as an Appleshare server tool and a flash memory backup tool.[6] Printing from the Pippin is supported through a limited number of Apple printers.[7] It supports saving data to a floppy disk or MO drive through a Pippin expansion dock.[8] PEASE can also launch the Finder as an application (if the filetype of the latter is changed to APPL).[9]

The following games are included on the CD-ROM:

PEASE version 001 was the first to be released in 1996 as a standalone product for the Pippin.[11]

On June 15, 1996, PEASE version 002 was bundled with Pippin Atmark consoles sold in Japan in a new lower-priced "Atmark body set".[12] It was nearly identical to the original release, except for the addition of a "Tablet Paint" (タブレツトペイント) HyperCard stack and support for the keyboard and tablet.[11]

In January and March 1997, PEASE was included on the Mac Bin CD-ROMs bundled with the Japanese edition of MacUser to allow Pippin consoles to navigate the disc contents.[13] Support for PEASE was discontinued on April 1, 1997, after the introduction of its successor PEASE Turbo.[14]

PEASE Turbo (version 2001) is a substantial update from the original release of PEASE that shipped on November 30, 1996.[14] However, it was not made available as an upgrade for existing users. It adds support for QuickTime audio and video media, and improves support for launching applications networking.[15] It works with Pippin ROMs from rev. 1.0 to 1.3, but rev. 1.2 or later is required for MO drive support.[16] 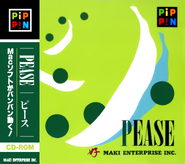 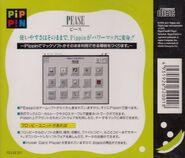 Back of jewelcase of standalone version PEASE001. 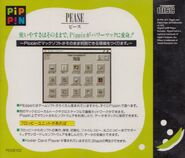 Back of jewelcase of bundled version PEASE002. 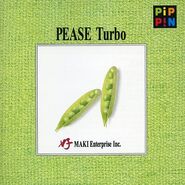 Pippin games and PEASE (Portuguese)
Demonstration of some mini-games included with PEASE.

Prince of Persia and Doom on Pippin
Running on a Pippin with the help of PEASE.

Community content is available under CC-BY-SA unless otherwise noted.
Advertisement