4kg
The Pippin Power Player (ピピンパワープレーヤー, EVT-2) is the second Pippin prototype design that was shared by Apple Computer with Bandai and its partners in Japan to develop and validate titles for the Pippin platform.[1][2] EVT is an acronym for Engineering Validation Test at Apple.[3]

These prototype consoles closely match the final design of retail units and were initially made available to developers for JP¥ 120,000.[4] Early pre-release units were not branded with logos and were sometimes modified with cables to attach external SCSI drives.[5] Some developer units had been upgraded with pre-release 4MB memory modules.[6][7]

The internals of the system were designed in Cupertino, California by a team assembled by Eric R. Sirkin, Apple's director of Macintosh OEM products. Testing of the electronics commenced with the preceding Pippin Concept Prototype (EVT-1).[8]

The external case was designed by a separate team between September 1994 and February 1995. Ray Riley and Rick Johnson of Apple Computer led the industrial design, with Dave Laituri and Gilbert Wong of Lunar Design consulting as product designers.[9] Early models of design studies bore the Bandai logo. The near-final design prototype was called the Pippin Power Player 100.[10]

The "Pippin Power Player" brand was first revealed at Macworld Expo Tokyo '95 and was also exhibited at the 1995 Tokyo Toy Show, though the earlier Pippin Concept Prototype (EVT-1) was still being used as a demonstration unit.[11][12] Bandai intended to have Pippin consoles ready for the 1995 holiday shopping season, but fell behind schedule.[13][14]

3,000 Power Players were manufactured in December 1995, of which 1,000 were seeded to developers with early "C3" ROMs. 500 of these units were supplied with updated "monitoring" ROMs for market testing.[15][16] One such pre-release console was displayed by Apple at Macworld Expo San Francisco '96 in January,[17] where the tentative name "PowerStation" was reportedly used.[18] It was also shown at the Winter Consumer Electronics Show that month in Las Vegas.[19] Some Power Player developer kits had also been branded on the underside as "Pippin ATMARK Personal Communicator".[20] Bandai officially launched the console as the Pippin Atmark and began taking pre-sale reservations on February 22 at Macworld Expo Tokyo '96.[21][22] 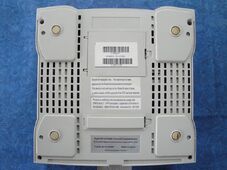 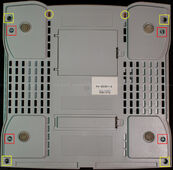 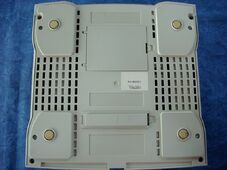 Some consoles with "monitoring" ROMs were shipped in the same final case as the Pippin Atmark with nearly identical markings, except that the product ID was PA-82001-S.[23] Monitoring units continued to be made available to developers and the price was dropped to JP¥ 80,000 in December 1996. When units with developer ROMs were no longer available, Pippin authentication dongles were provided for developers to use on consumer models with ROM revision 1.2 or later.[4]

A clear prototype controller found with a Pippin Power Player, alongside standard black and white units.

Back of Pippin Power Player box.

Side of Pippin Power Player box, marked "NOT FOR SALE".

Community content is available under CC-BY-SA unless otherwise noted.
Advertisement