Terror T.R.A.X.: Track of the Vampire

Terror T.R.A.X.:
Track of the Vampire

US$ 24.95
Terror T.R.A.X.: Track of the Vampire is a CD-ROM-based horror/mystery adventure game that had been announced for Pippin @WORLD.[1]

Developed by Ground Zero Productions,[2] Terror T.R.A.X. was based on a series of audio adventures that had originally been produced by Flint Dille for TSR.[3] The game featured nearly an hour of digital video with "3-D" sound and was described by Bandai Digital Entertainment as being suitable for teens by avoiding depictions of graphic violence.[2]

3 Prong Plug, a division of Grolier Electronic Publishing, released the Macintosh and Windows versions in 1995.[4]

The Pippin port had been promoted on Bandai's website and in the packaging of the releases of other @WORLD titles.[2][5] A beta version is known to have been pressed on 27 September 1996 without authentication,[6] but it is unclear whether a commercial version had ever been released.[7] The audio adventures were made freely available by Wizards of the Coast.[8] 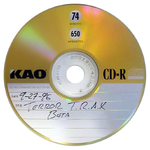 Beta version of Terror T.R.A.X. on an unauthenticated CD-R.